Cricket persuades the family to go to a Thanksgiving sale at a big-box store for a deal on a new television.[1]

The Greens are preparing for Thanksgiving by talking about what they are all thankful for. Cricket on the other hand is angry that the TV they own is old and has poor reception. As Tilly helps by redirecting the antennae, they catch a commercial for Price Busters. The eccentric manager Louis announces that they are having a Thanksgiving Day sale and that they have TVs at low prices. Cricket convinces the family to go to Price Busters under the belief that they will be in and out in no time.

To their surprise, Price Busters in crawling with manic customers who are desperate to buy things at the store's insanely low prices. As the family prepares to leave, Cricket convinces them to stay by telling them the benefits of having a better, brighter and clearer TV. The Greens prepare themselves and head deeper into the store.

They arrive at the sports section where Louis announces to everyone discount prices. The mob ends up separating the Greens as Cricket calls for them to meet at the electronics. Gramma Alice ends up enjoying pummeling the other customers, Bill becomes distracted by a high quality fishing pole for $5.00, while Tilly uses her smarts to take out the other customers. Eventually Cricket finds the TV and calls his family, but a generic family arrives and they all fight over it. During the scuffle, Cricket is flung away and ends up in the security room where he sees the devastation in the store unfold including his family who have regressed into dangerous people fighting over a TV.

Louis reveals himself by stating that because he can never enjoy Thanksgiving himself, he likes to destroy everyone else's. He then unveils his "finale", a 180-inch, 40K, HD Vibra-color TV for just $1.00. Everyone proceeds to claw for it and Cricket runs out to stop them. He finds a giant mallet and tosses it at the TV, shattering the screen. Everyone is about to attack Cricket, but he makes a speech about being thankful for what you have rather than what you want. As everyone applauds Cricket's speech, another shopper enters to tell everyone about another sale and they all leave. The Greens congratulate Cricket on the speech and decide to have Thanksgiving with the food that Price Busters has to offer. Out of sympathy, the Greens invite Louis to join them as they watch Football on the giant TV.

In the last scene, a man left tied to one of the ceiling fans during the riot calls out, "Hello?" 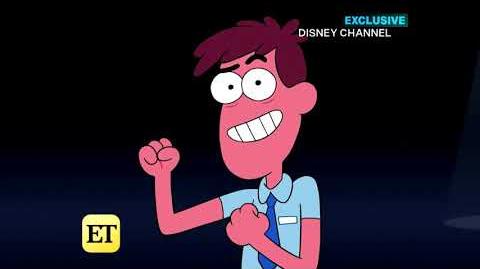 Retrieved from "https://bigcitygreens.fandom.com/wiki/Big_Deal?oldid=43646"
Community content is available under CC-BY-SA unless otherwise noted.