Cheap Snake is the 46th episode of Big City Greens. However, it is the 44th episode segment in chronological order.

Cricket and Remy are enjoying a day out, but when the latter begins listing the various things they can do, the former flips and suggests that they simply act on an impulse. They enter Kiss Kiss Pet Pet and are greeted by the eccentric store owner who leads them to a Patagonian Purple Python. Cricket purchases the python for 50 cents and proudly announces that he made a good decision. He tells Remy that he acts based on a commercial he saw that said "No think. Just do." and has lived on that philosophy since then. Cricket, Remy and Snakey spend the day together and then stop by Big Coffee where Gloria tells them to leave once Snakey begins acting up.

Back at home, Tilly is bothered by Snakey as Cricket continues to act on impulse; further complicated by Bill suddenly heading out on errands. Snakey begins acting up again when he begins slithering through the walls and starts choking Cricket. The kids call upon Gramma Alice to step in to discipline the Snakey, but she turns out to be severely afraid of him and knocks him out into the yard where he continues to act up. Tilly and Remy finally tell Cricket that buying Snakey was one of the worst decisions he has ever made, but Cricket refuses to listen and goes out to get him.

Cricket is horrified to see that Snakey has devoured the farm animals and rushes inside to get Tilly, Remy and a newly arrived Bill who is caught up with the events. Cricket chases down Snakey and gets most of the animals out of Snakey, minus a chicken, and he proceeds to chase him into an ally. With no other options, Cricket dives into Snakey to retrieve the last chicken and gets stuck, leaving the rest to comically get him out. Snakey is eventually caged and Cricket tells his family he learned his lesson.

Everyone takes Snakey back to Kiss Kiss Pet Pet, only to learn from the owner that she has gone out of business. Cricket finally decides to think of something and realizes that Remy would be a better owner for Snakey due to his knowledge of reptiles. Everyone agrees and Remy takes Snakey home. Cricket moves on to his next pet: a scorpion that stings him in the eye. 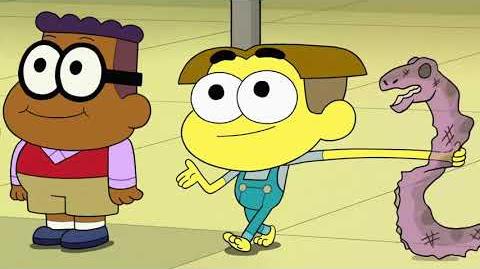 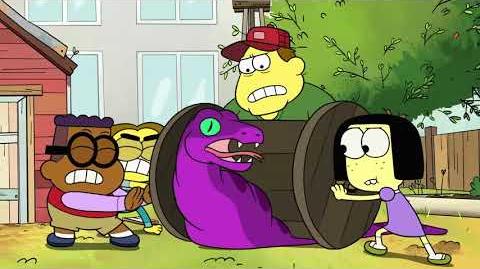 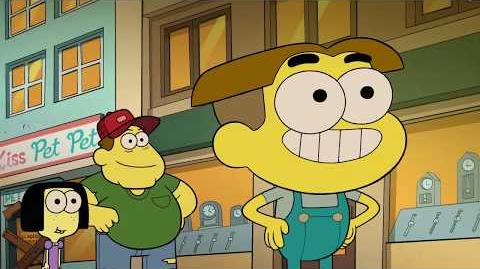 Retrieved from "https://bigcitygreens.fandom.com/wiki/Cheap_Snake?oldid=45647"
Community content is available under CC-BY-SA unless otherwise noted.