The Green family's nemesis Chip Whistler shows up at the farmers' market in an attempt to steal business from them.[1]

The episode begins in media res with Cricket at the farmer's market in the middle of a giant tomato war. Earlier, the Green Family is setting up Green Family Farms at the Farmer's Market with Gramma Alice anxious to get the hottest pepper she can find for her 10-Alarm chili. She drags Bill away, leaving Cricket and Tilly to watch over the food stand. Suddenly, Chip Whistler (with composite resin for his fixed broken teeth) arrives to intimidate Cricket for their previous encounter. Cricket does not want to be outdone by Chip for his dirty tactics so he recruits Tilly to help bring him down. Meanwhile, Alice tries the various peppers at the market, but is dissatisfied by every single one she tries. She and Bill are suddenly approached by a mysterious Pepper Merchant who has them follow him to his pepper stand, located in a tent in a back alley.

Cricket and Tilly start their feud with Wholesome Foods as they start beckoning customers while Chip stoops to lows to get people over to his booth. Eventually, Cricket and Chip both start insulting one another much to the excitement of the gathered crowd. Chip pulls his trump card, half off coupons for the customers. Cricket and Tilly seem defeated until Cricket decides to rally his fellow farmers to fight back at Wholesome Foods.

Alice and Bill enter the Pepper Merchant's tent as he shows off his selection. While Alice is slightly intrigued by the products, she is still unimpressed, resulting in the Merchant showing up the Sultan Pepper. Alice eats it, much to Bill and the Merchant's shock, but she approves and is given his whole stash.

Cricket and the farmers go to war with Chip and Wholesome Foods with tomatoes being thrown left and right. Tilly is overcome with sadness over the wasted produce and tries to talk some sense into Cricket. She tells him that she needs to stop the fighting as it has destroyed the market. Realizing she is right, Cricket steps up to Chip and puts his "weapons" down, convincing him to put aside their differences and calls for a truce. However, Chip sees this as a forfeit and instead attacks Cricket with more tomatoes, celebrate himself his own victory. But the customer, including his employees are appalled by Chip's action, declaring it was far too harsh and nasty to truly be a "victorious." They all feel sympathetic for Cricket and call Chip out on this as they storm off the stand in disgust. Rather than atoning his action, Chip frantically insists that he won, but everyone ignores him.

Alice and Bill return just in time to get a customer, but Chip smugly attempts to eat all the produce, so they won’t sell them. Upon seeing the Sultan Peppers, Chip eats them too and ends up getting a burning tongue and his resin melting and vows revenge again. The Greens promise to be ready for him, just as Bill remembers who Chip is. 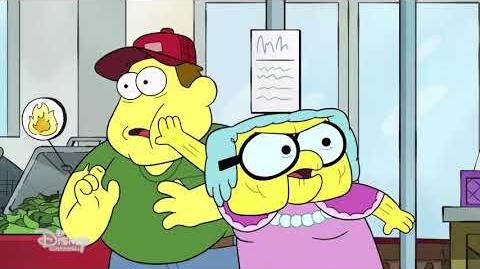 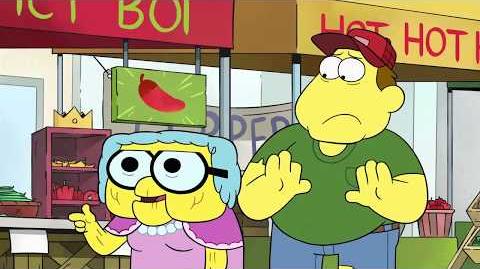 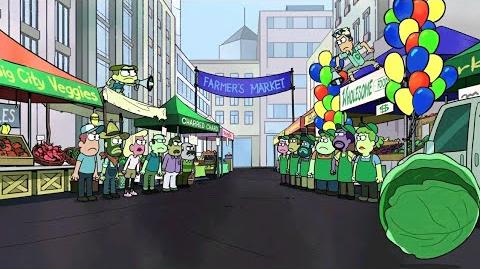 Retrieved from "https://bigcitygreens.fandom.com/wiki/Feud_Fight?oldid=47234"
Community content is available under CC-BY-SA unless otherwise noted.