Forbidden Feline is the 39th episode of Big City Greens. However, it is the 37th episode in chronological order.

Tilly is trying to get the farm animals to join her and Saxon for tea, but none of them are cooperative. A white fluffy cat named Anoush appears and takes a liking to Tilly, but he is scared away by Gramma Alice who insists that she stay away from the cat because it belongs to her most hated arch-nemesis, Mr. Grigorian who enjoys dumping trash onto Alice's lawn. Tilly goes to Mr. Grigorian to ask to see Anoush, but he rudely turns her down. She next sets up a tray of milk and tuna for Anoush when Cricket shows up to see what she is doing. When Anoush shows up, Cricket is shocked as he knows of Alice's feud with Mr. Grigorian, whom he is convinced is a "Dracula", and tells Tilly that she needs to be careful.

Tilly resolves to meet with Anoush in secret and has many close calls with Alice and Mr. Grigorian. However, Tilly is unable to keep their friendship a secret and Mr. Grigorian finds out and takes Anoush away, despite the cat clearly wanting to stay with Tilly. Mr. Grigorian builds a cat fence and Tilly asks Cricket's help in breaking into his apartment while he is out shopping. She manages to jump in and find Anoush, but Cricket is freaked out by Mr. Grigorian's return and flees back home. He enters and finds evidence of Tilly in his apartment and tries looking for her and Anoush, but is unsuccessful and they have both evaded him.

As Tilly is about to leave with Anoush, she hears Mr. Grigorian crying and learns that he is all alone and has no one else. Feeling bad, Tilly gives Anoush back and tells him that she has learned that he loves Anoush just as much as her. Realizing that Tilly truly loves his cat, he decides to take down the fence so that he can let Anoush see her every now and then.

Anoush is later seen playing tea party with Tilly and Mr. Grigorian is shown to be on better terms with her, though he still hates Alice. For bailing on her, Cricket is forced to play dress up with Tilly, but he is more upset at the fact that he did not get to pick the dress. 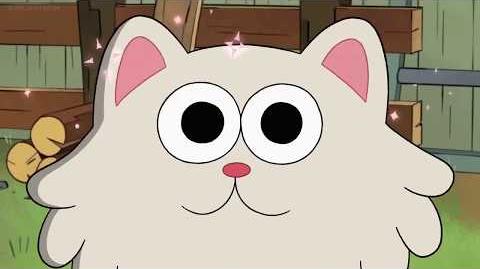 Retrieved from "https://bigcitygreens.fandom.com/wiki/Forbidden_Feline?oldid=83907"
Community content is available under CC-BY-SA unless otherwise noted.