When Gramma crashes into a parked police car, she loses her driver's license and her confidence.

Cricket and Tilly want to try frozen yogurt at a new shop that opened up, but Bill has gardening work to do and cannot go. Gramma Alice offers to take the kids and Bill reluctantly agrees. Alice reveals that she has her own car and was once a racer in her youth named Hot Rod Alice.

The three drive off, but immediately crash into Officer Keys' car. Alice shows her license, but it is expired and Keys goes so far as to say that it is useless with Alice visibly shaken by the remark. She is ticketed and asked to take a driver's exam to get a new license.

Alice refuses to take the exam as she feels that she does not need to prove anything, but Cricket and Tilly set up an obstacle course in the backyard and she agrees to go through with it. Using a tractor, Alice appears to be doing well, even avoiding the obstacles in the way, but her cockiness has her speeding through it and she crashes into the garage. Alice solemnly resigns herself from making anymore attempts to practice her driving, so Cricket and Tilly decide to take matters into their own hands.

Stealing her glasses, Cricket tricks Alice into Bill's truck and has her drive him and Tilly, but Alice refuses to drive, resulting in the truck rolling down the street and causing accidents. Alice finally admits that she is afraid of failing the test as she feels that it will mean that she is useless, but Cricket and Tilly comfort her. Suddenly, the truck ends up at a monster rally and they are attacked by Crunchosaurus Rex, a giant robotic dinosaur. Now full of confidence, Alice destroys Crunchosaur and she and the kids successfully escape.

Later, Alice passes the exam, though she cannot drive on freeways or after dark. She celebrates by taking the kids to get frozen yogurt leaving Bill once again to work on the yard alone. 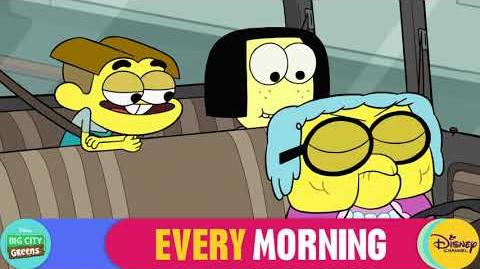 Retrieved from "https://bigcitygreens.fandom.com/wiki/Gramma%27s_License?oldid=83891"
Community content is available under CC-BY-SA unless otherwise noted.