Season 2 is the second season of Big City Greens. It premiered on November 16th, 2019 after an eight month hiatus.[1]

This season features a musical Christmas special and a CGI-themed episode ("Green Christmas" and "Level Up" respectively). In addition to themed episodes, the season focuses on other characters rather than just the main characters (Green family). A few characters who appeared in the previous season appear in this season, including new characters like Gwendolyn Zapp.[3]

Season 2 is also the point which officially sets Chip Whistler up as the main antagonist of the show, in which the Greens help Chip get the position of CEO of Wholesome Foods and take over for his retiring father. However, they soon realize he tricked them into accepting his apology that he's sorry for their actions so that he can run them out of town with all the power he has; at the end of the second half, Chip takes over Big Coffee and plots an expansion plan which will be right where the Greens' house currently stands, and the family must defeat him once and for all.

Like the first season, the second comprises of 30 half-hours.

According to Shane Houghton, this season will have additional 30 half hour episodes similar to the first season[4], bringing over 60 episodes from both of the series' seasons, while 120 11 minute segments in total.

On April 26th, the show was featured during the Fan Fest 2019, with the creators showing storyboard animations of upcoming episodes, including a beach-themed episode ("Shark Objects"), which was mentioned to premiere sometime in the fall of 2019.

The voice actor, Marieve Herington, was interviewing and mentioned that season 2 will get more "wackier and wackier", plus mentioned that Tilly and Bill will create a video, similar to that of YouTube ("Bad Influencer"), and also have a night talk show. (would be Miss Tilly's Fun Time TV Minute) [5]

On August 24th, during D23 2019, Shane added that this season will feature a musical Christmas special, containing 6 songs associated with the theme. This episode would turn out to be "Green Christmas".

Season 2 will feature more of the same as the first season, whilst adding new guest stars, more shorts, promo, and newer content. [6]

Halfway into production, the cast went on hiatus for four months, mainly due to the coronavirus (colloquially COVID-19) pandemic, forcing most of the staff to work on the production restrictively at home. The voice actors recorded all their dialogue from their bedroom closets.

During this season's run, the short Big City Greens: Road Trip premiered on Disney Channel and its YouTube channel. 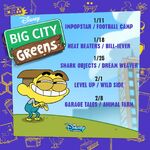 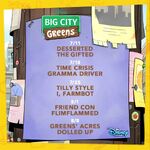 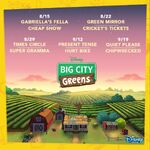 Add a photo to this gallery

Retrieved from "https://bigcitygreens.fandom.com/wiki/Season_2?oldid=60180"
Community content is available under CC-BY-SA unless otherwise noted.