Space Chicken is the first episode, initially a pilot, of the first season and the 1st episode Big City Greens. However, it is the second episode in chronological, and production order.

To impress his new neighbors, Cricket attempts to launch a chicken into space.[6]

The episode began with a male jogger, jogging past the Greens house, he stopped as he heard something coming, all the sudden, a red tractor fled over past the car, with Cricket and Tilly being seen on it, as it landed upon the mud spot in front the house, it swerved out of control, causing Tilly and Cricket and the tractor to flip over while landing safely, as Cricket walked towards the jogger as he greeted him, but the jogger took no response but jogged away, suddenly Bill slammed the door open as he frantically saw the tractor was on fire and try to put the fire out with his hat, as Cricket explained that he mowed the front yard, and then did it to a golf course before being punted by golf balls, and finally on the highway while scared, as he stated that he had no idea how they got here as Bill asked if Tilly is alright but her response was she seen danger while liking it, Bill explained the kids that they’re new here in and how things are different since they left the country and how they are as he tried to greet Ms. Louis, in her response, was that she yelled and telling them to clean up the mess and called them a hillbilly and closed the window.

Bill lastly stated that the neighbors are unaware about them as he added that they need to make a good impression, to make them more interesting, just before he walked as he accidentally stepped on one of the bear traps as he explains Cricket with the traps as he walks away while dragging it. As Cricket tries to come up with a idea to impress the new neighbors, he tries asking Tilly for some suggestions, until he looked upon the the chicken, which it sparked his idea as he tells Tilly to they’re going to launch a chicken into space.

Then Cricket came up with the supplies to use as to catapult the chicken, as he used a cinderblock and a wooden plank and try jumping on one end to launch, but only a little to launch it. Cricket decides they need more man power, and he asks a boy walking along the sidewalk in front of their yard if he would like to help them launch a chicken into space. The boy says his parents wouldn't approve, but Cricket says his parents aren't here, so the boy decides to skip his violin lessons and join in. As Cricket introduces himself and Tilly, the boy introduces himself as Remy.

Cricket and Remy sneak into Gramma's room to look for an old piece of clothing to use as a slingshot. Remy accidentally knocks over Gramma's wooden leg and thinks he broke it, but Cricket assures him it's been broken off for years. As they get the old clothing they need for the slingshot, they accidentally wake up Gramma. Gramma gets mad at the two boys for trespassing and says they're gonna have to pay the "ultimate price", which is kisses, which annoys Cricket. But Gramma angrily insists the two of them each give her a kiss. They reluctantly do so, and then she tells them to get out, which they do.

As Cricket is about to launch the chicken off the roof, Tilly says to tell the chicken he believes in her. Cricket says that's silly and he won't do it, but he does, and he attempts to launch her into space, but he slips and accidentally launches the chicken into a local cafe, which infuriates the barista, Gloria, and her customers. Cricket realizes he's in big trouble as Gloria confronts Bill about Cricket thinking "it would be fun to launch a wild animal into [their] cafe", and one of the customers claimed there was a chicken in his chicken salad, and it ate some of it, which disgusts Gloria. She then asks Bill to "keep the animals on [his] side of the fence", including "little what's-his-name". As Gloria nervously left, Cricket introduced himself to her, and called out to her, "I'm your new neighbor!"

Bill tells Cricket that this is exactly what he's talking about, and as punishment, he is grounded and is to stay in his room for the rest of the day. Cricket thinks he's joking, but Bill assures him he isn't, and firmly gestures Cricket to his room, which he angrily does. Remy asks if he should go into Cricket's room too, so Bill scowls at him too, which scares Remy into Cricket's room. As he does, Bill wonders "who the heck was that?" While in Cricket's room, he and Remy notice a rocket and decide that will have enough power to launch the chicken into space. When Cricket catches Tilly in her bed he tells her two things: To stop "daysleeping" and to help them launch the chicken into space with the rocket. Remy asks Cricket how they can get out without his dad noticing them, so Cricket points out a secret exit - through the bottom drawer of his dresser. As they escape, Remy asks Cricket if his room gets cold at night, and Cricket replies "very much so."

As they are about to fire the rocket, Cricket speaks through a traffic cone for all of Big City to come and watch him launch a chicken into space. As they fire the rocket, Cricket is excited, and the chicken is nervous. But when the line reaches the end, instead of the rocket blasting off, all that happens is fireworks and a small American flag popping up. Everybody leaves, which panics Cricket, and he starts launching all of the hens into space, each attempt failing, as he only managed to launch them onto people's faces, and one on the windshield of a guy's car, which makes him crash into a telephone pole, which cuts the power in the Greens' house, which makes Bill realize that Cricket is back to his shenanigans. After they run out of chickens, Cricket decides to launch the one they tried to launch from the beginning - the one who is still wearing the tiny helmet. Cricket launches the chicken the farthest he's ever launched, and whispers that he still believes in her. As he releases the chicken, he successfully launches her into the sky.

As Bill and Gramma come outside, Bill wonders what just happened, so Cricket explains he just managed to impress their new neighbors. As a couple of kids stop by and tell the Greens they're awesome, Bill is impressed himself. As the four of them engage in a friendly wrestle, Remy asks if he could join in on the roughhousing as well, so they allow him to do so. The episode ends as the camera shows the final chicken made it safely back to earth, landing atop a building. 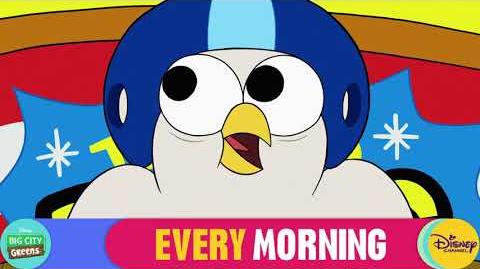 Retrieved from "https://bigcitygreens.fandom.com/wiki/Space_Chicken?oldid=83642"
Community content is available under CC-BY-SA unless otherwise noted.